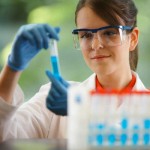 As a result of Government regulators finding formaldehyde in the formulas of several of keragreen‘s competitors, Organic Salon Systems worked with Lord Beauty Design to engage the services of four (4) independent national laboratories to conduct sample formaldehyde tests on Keragreen to determine if formaldehyde was present in the product.  The results of the lab tests, along with the certifications, are found below.

To select the best labs to conduct the tests, several criterial was used.

All of the selected labs met most if not all of the above criteria.