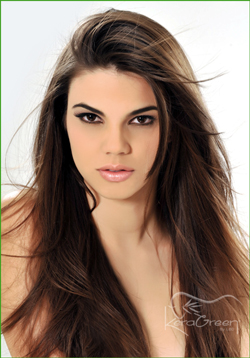 After migrating with her parents to Miami at the age of 12, Aguiar quickly became accustomed to the fast paced lifestyle of the growing city. Even at such a young age, she knew she had a lot to learn and a lot of work ahead of her if she wanted to achieve the “Super Star” status she has longed for since childhood. Damaris Aguiar’s parents enrolled her at International Models Agency where she was taught modeling and etiquette; soon after graduating from the course she was hired by the school as a teacher. By age 14 she was teaching, modeling and starting high school.

During a casting for MMT Pageants, Damaris Aguiar met the person that would open the doors for a long road of beauty pageants, Ms. Rose Martinez. Martinez took the then 17 year old under her wing and guided her through her first pageant, Miss Hialeah 2003 where she landed 1st runner up, and Miss Miami Tropic Jr. 2003 where she took her 1st win and title.
After graduating high school in 2004, Aguiar attended Florida International University, majoring in Marketing and Management. Taking a break from pageants and modeling, the young woman focused her attention on graduating with her Bachelors in Arts.
Ready to get back to work on the runway, Damaris Aguiar returned to the stage in 2006 competing and winning the title of Miss Maja Cubana 2006. Aguiar went on a modeling tour through Argentina for two years and returned to Miami for a series of title wins which included: Miss Miami Gardens 2008, Miss Hialeah USA 2009, Miami Miami USA 2010, and Miss Carnaval Miami 2011.

During her reign as Miss Carnaval Miami 2011, a Kiwani’s Charity organized pageant; the young model has been sponsored by the organization and has been named the spokesperson for KeraGreen by LBD and Coca Cola Florida. She is also the campaign model for GenRation shoes and a mentor of the non-profit organization Big Brother Big Sister. Her modeling has been featured in publications such as City Magazine, Aventura Digest, Miami Herald, and Venue Magazine. Expanding from modeling, Damaris Aguiar has also been featured in numerous music videos including “Why Wait” by Rascal Flatts; “Santa give me” by J Randal; and most recently “Your Lover” by Anthony Bless.
Most recently named Miss Cuba Intercontinental 2011, Aguiar prepared for her biggest pageant yet, Miss Intercontinental in Spain where she placed among the Top 15 finalist but unfortunately did not win the title. She now is the title holder of Miss Miami Latina 2012.
Damaris Aguar is a co-owner of Pilar Dance and Model Academy where she continues to teach. She is also the Director of Marketing and Sales for the Miss Miami Tropics pageant and is very involved in the preliminary pageants for Miss Florida USA. She is signed with Green Agency where she is working directly with renowned acting coach Bernhard Seifert at Green Screen Studios.

With a full agenda and a drive like no other, Damaris Aguiar is a force to be reckoned with and star all of her own.