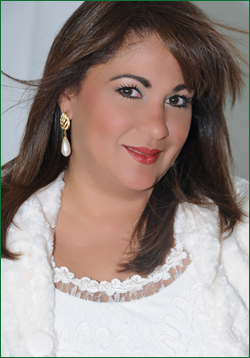 Born and raised in New York, Diana Tirado has always had an eye for all beauty things. A Miami resident since 1991, Tirado obtained her license as a skin specialist and conducted seminars and training for product knowledge for European brands such as Talika USA, Bio Jouvance, Paris Ojan among others. In 2000 Talika USA was placed in Sephora stores in the United States were she traveled for five years introducing these lines to the U.S. market and Latin American. In 1996, Tirado founded a location of educational seminars named “European Spa Lady D”, where national and international cosmetologists were taught and sold the latest products in the beauty industry. Diana Tirado also participated as a judge in the Miami Beauty Contest of 1996. But it wasn’t until tragedy struck that she was led her to pave way for the new era of organic beauty products.

“One of the most tragic experiences of my life occurred when an application of Keratin containing formaldehyde nearly took my life. I had a severe allergic reaction which worsened each day. In addition to the dreadfulness of being ill, I was emotionally distraught by the doctors’ uncertainty of my prognosis and the endless hospital stays. It wasn’t until the doctors decided to run a specialized toxicology exam that my prognosis was determined. The results had showed that the high levels of toxins found in my body were caused by the malignant ingredients used in Keratin treatments.

I visited a chelation specialist after many consultations with toxicologists and failed treatment and I was advised that it was urgent that I begin a series of therapies to detoxify and replenish the oxygen in my blood. I began an IV detox program that lasted a period of eight months, in which treatments were done almost daily with multiple IV cycles per day.

Because of due to this unfortunate event, I set out to find a way to formulate a Keratin treatment without formaldehyde, I thought of all the women who were potential victims of what had happened to me and how to generate a product with all the benefits of Keratin while simultaneously contributing to their health.

After an advanced research on formaldehyde, I sought chemists and together we developed a type of Keratin that would be free of formaldehyde. Organic and natural ingredients from Israel, Switzerland and the United States were the foundation of this newly developed product that would help rejuvenate hair in a natural way, we also decided to add amino acids such as L -Cystine and other proteins to strengthen the formula. It was after all this that the era of the organic Keratin was born and was given the name KeraGreen.